A Vest For My Mother-in-Law 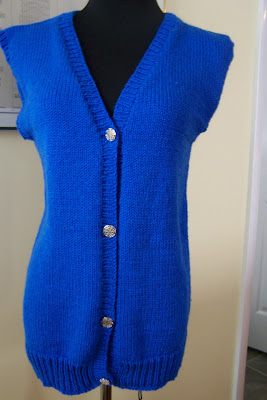 Some time ago my mother-in-law asked me to help her find a vest pattern.  She had admired a vest that I had knitted and found that vests were not easy to find in stores.  She has crocheted all her life, but her arthritis makes it difficult, at times, to continue.  Although she had also knitted, she did not make many garments.  She loved to crochet and knit afghans and baby blankets.  I found a pattern that began with knitted ribbing and continued in crochet for the body of the vest.  She quickly relearned how to knit and purl, but ripped out multiple times before she ever reached the crochet part.  One day she brought the yarn and needles over and handed it to me to get it out of her house.  In hindsight, I should’ve knit the ribbing for her and let her pick up on the crochet.  But I set it aside and thought I’d surprise her with a vest.  She had picked out the yarn, which had a lovely color.  But, I have to say, it was an awful acrylic.   I’ve knit with many acrylics which are very nice and soft.  But this one truly felt like plastic!  Perhaps that was really her problem, too.  She was constantly fighting the yarn.  I decided to try a vest on my Ultimate Sweater Machine.  I found this machine at a garage sale for $15.  I have had some minor success on the machine.  There is definitely a learning curve and I am learning.  I then “designed” a vest using Sweater Wizard.  Sweater Wizard is software (given to me by my husband a number of years ago) which enables you to design sweaters using the yarn and needles you choose and the gauge you get by using them.  I find it a great tool.  Although I’ve used it for simple designs, many people use it alongside commercial patterns to customize those patterns.  I measured some of my mother-in-laws sweaters, but wanting it to be a surprise required some guesswork on my part.  When I finished it, I presented it as a birthday present.  She was thrilled and showed her appreciation by wearing it the next time I saw her.  It has flaws.  It needs a few extra inches of ease, more buttons to prevent the pulling that occurs, and the shoulders should have been more narrow because of her body shape now.  Lessons learned, as always.  After her failed attempts using this yarn, she turned to crocheting simple triangular shawls (one of which I posted about here.)  They are lovely and she has made quite a few for siblings, daughter-in-laws, and nieces.  At 83, I hope she continues to find enjoyment from her craft.