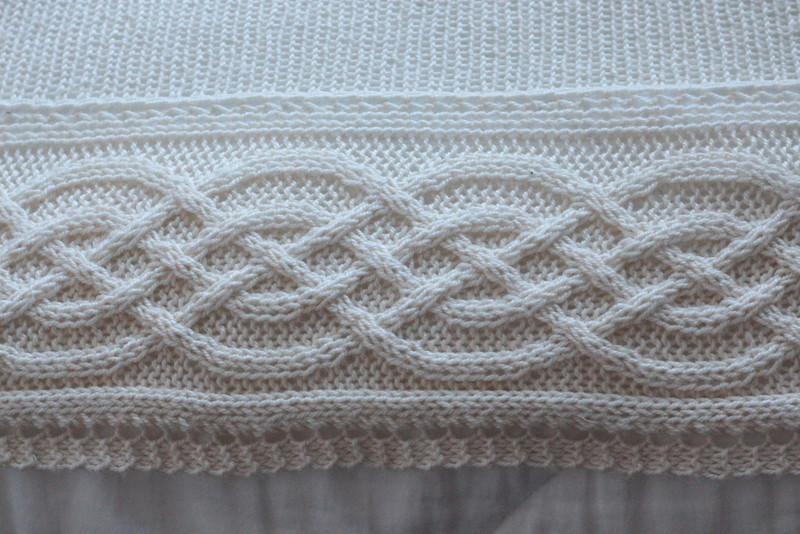 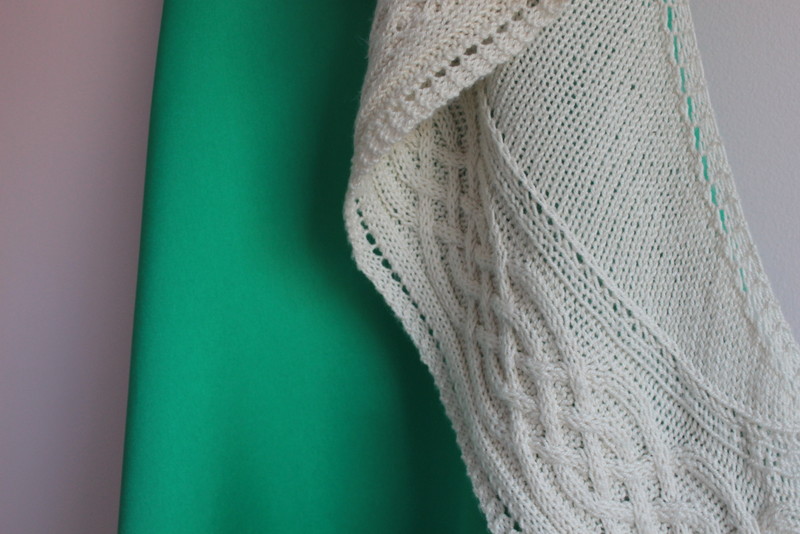 We just celebrated my daughter’s St. Patrick’s Day wedding!  It was lovely in so many ways and we are just starting to come down from the excitement. I will be sharing some wedding photos on a later post, but wanted to share the Celtic Myths shawl project first. 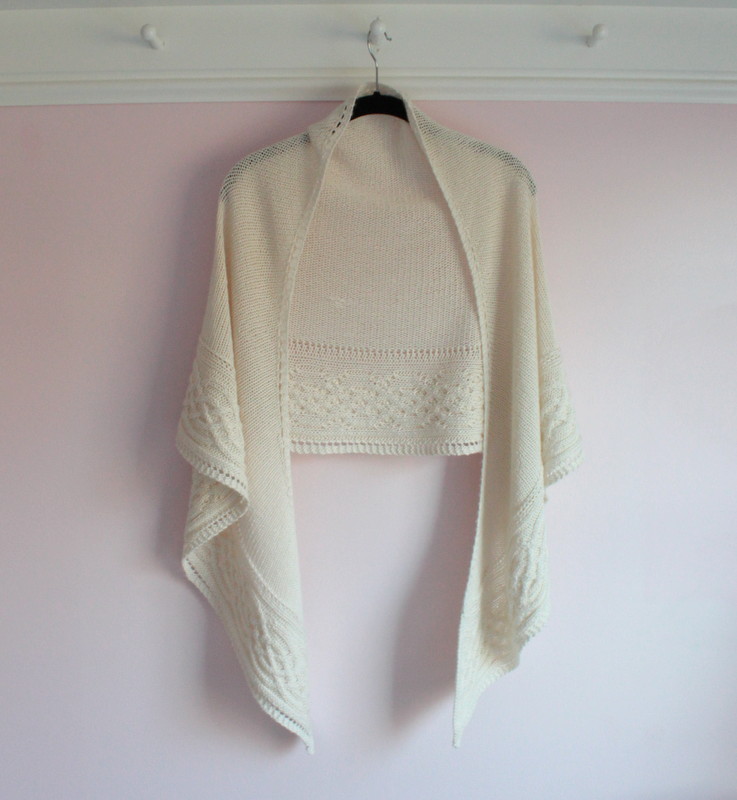 As I pondered the March wedding, I thought that the Cleveland weather can either be warm or snowing.  I decided that I wanted to make my daughter a shawl to wear on the wedding day and to have as a keepsake. I scoured wedding shawl patterns on Ravelry and stumbled upon this lovely shawl. I figured that the stockinette part could be knit fairly quickly. I found a beautiful silk/wool yarn at River Colors Studio, an amazing knit shop! I purchased all six skeins and hoped that it would match. I cast on a week before Christmas. It was a simple pattern once I got started and I completed that portion in January. I read some of the changes people made  with the pattern to eliminate the bump at the top, but I didn’t want to take the time to make modifications. So I dove in! 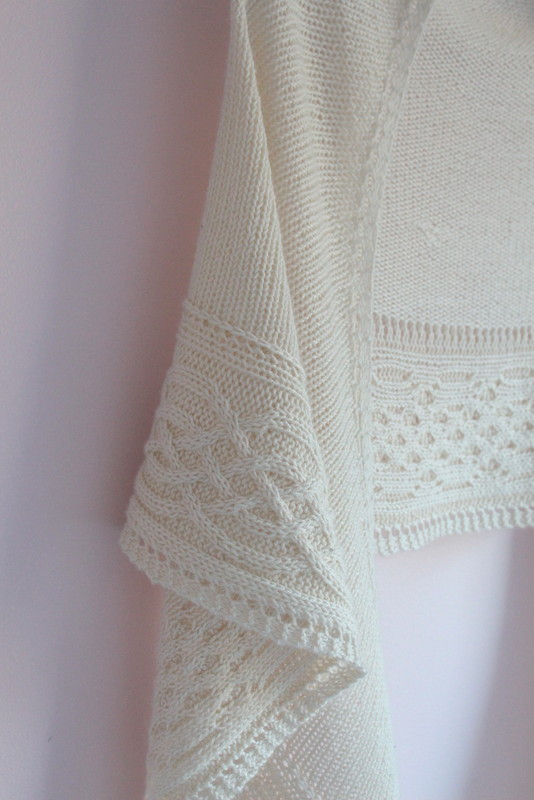 It took me a few times to get the cable portion started.  But once I got going, it took me about an hour to complete one 16-row cable section. I had knit my shawl a little bigger, to 245 stitches, so I needed to make 30 repeats. I planned to knit one per day so that I would complete the shawl in February. 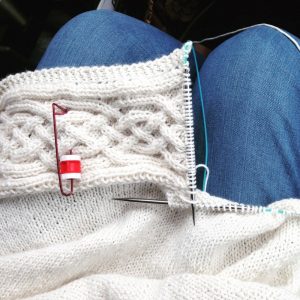 I took it in the car a number of times and on a ski trip, but mostly knit it on the couch with the pattern beside me. It felt good to make progress, but project monogamy was tough.  (I probably have 6 or 7 projects on needles right now.)  By about the midway point, I was bored.  I took a break for a day or two and then resumed. When I got within two repeats of the end, I weighed my yarn and realized I would not have enough. I then began a scramble to find one. A few Ravelry members had some, but I didn’t connect with them in time and finally found a shop in Connecticut that shipped me one out. 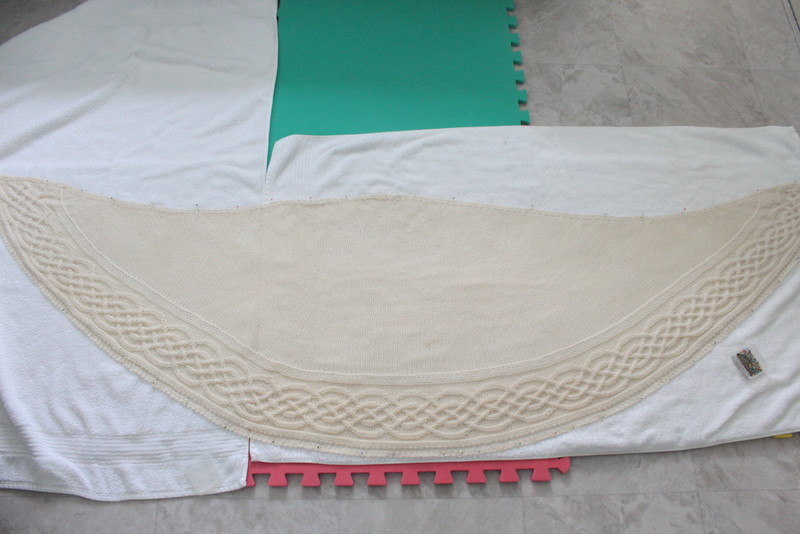 The cable cast on was a little wonky, so I tried to straighten it out with blocking as best as possible and I kept it in line with the top of the shawl. 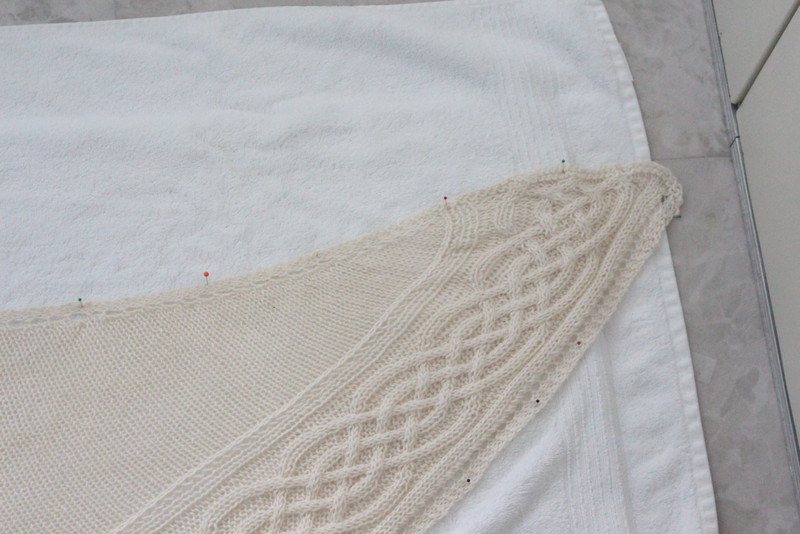 The bind off edge was a little less wonky. 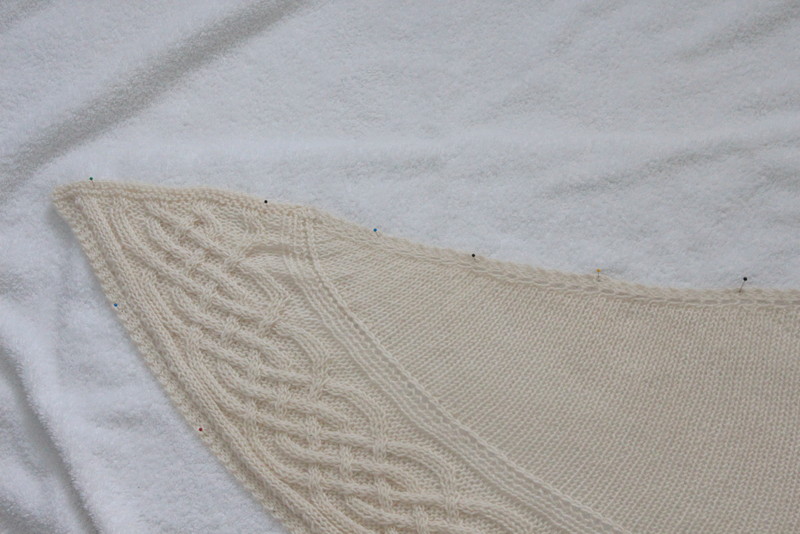 I soaked and blocked the shawl as straight as possible across the top. I probably could have made it a bit straighter, but it blocked beautifully. 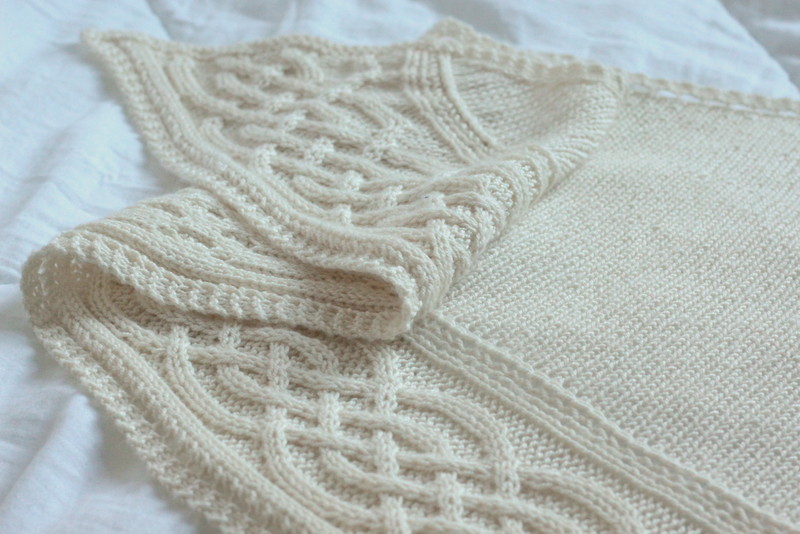 I did one thing that I would not do in the future which was to end a row right, smack dab in the middle of the shawl. So the woven ends show up when you hold it up to the light.  I could have at least buried those at the lower edge. But I learned something! 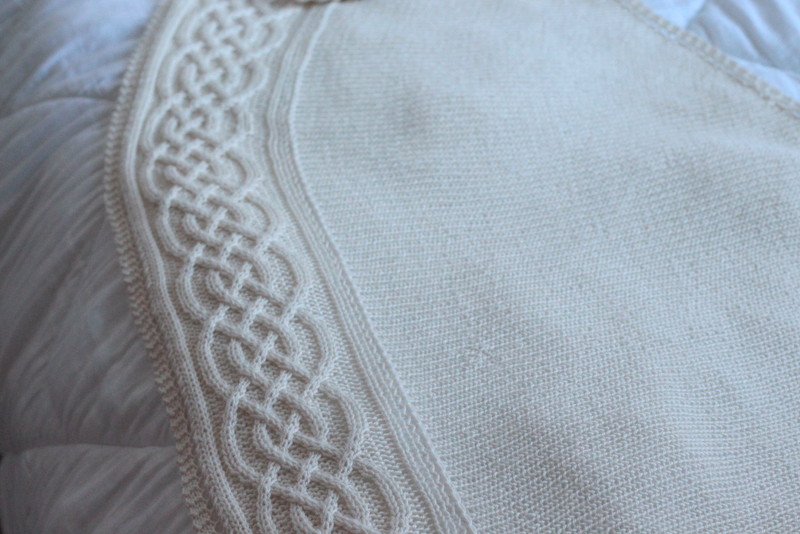 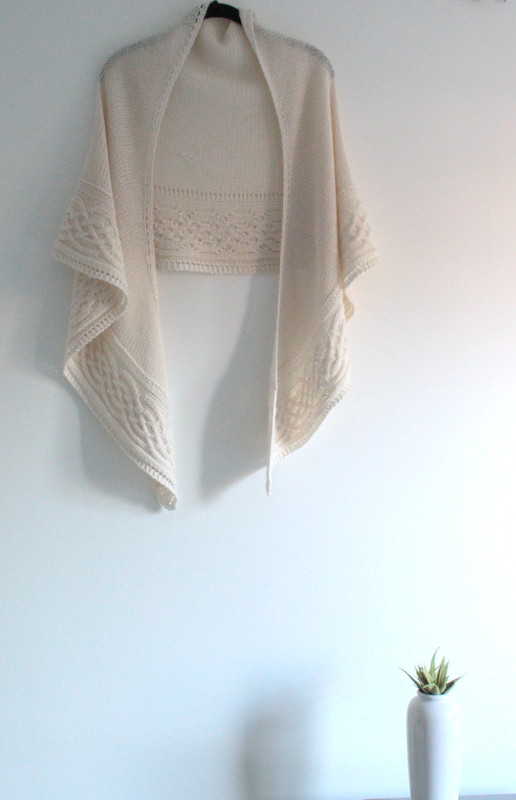 Here it is with the bridesmaid’s dress. 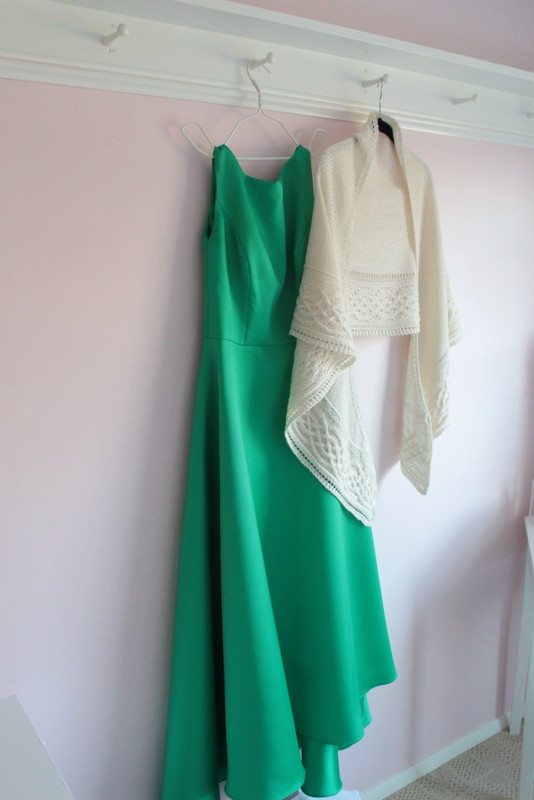 We brought the yarn to the second fitting and I felt the color was a good match. Here we are at the third and final fitting (but before her dress was pressed.) 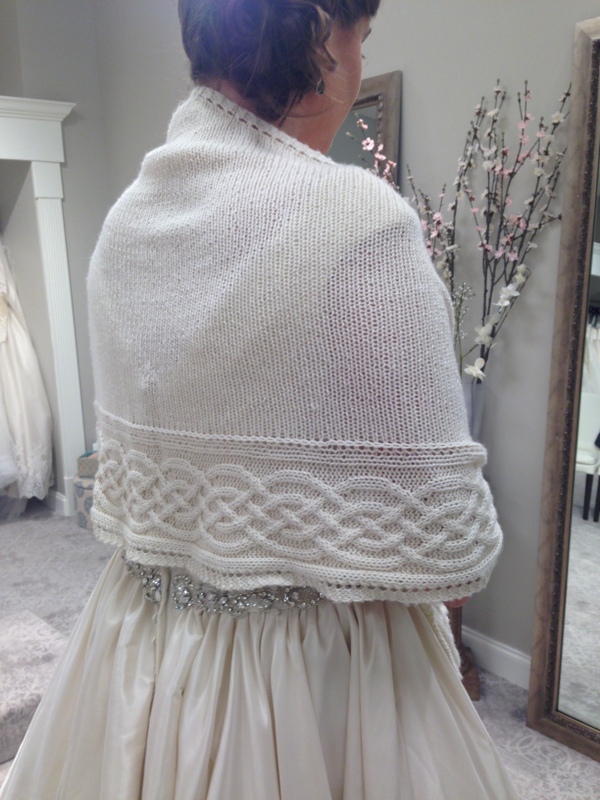 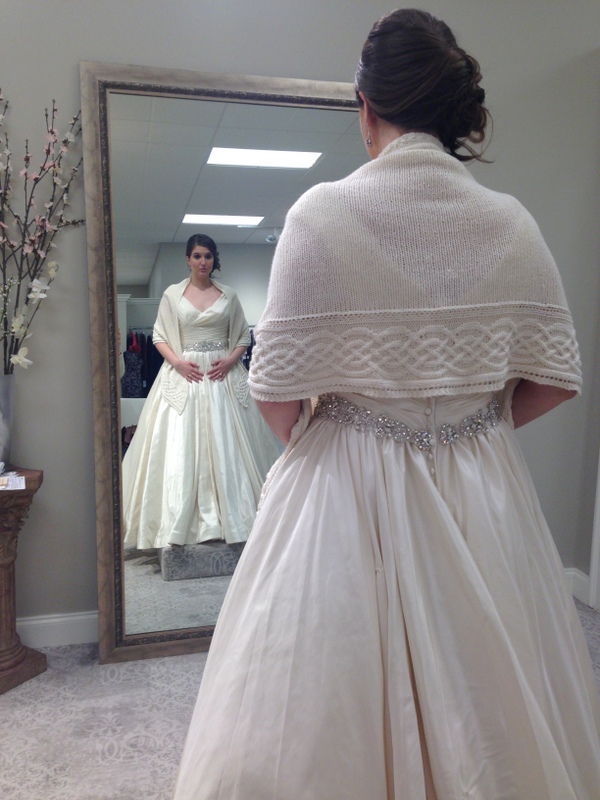 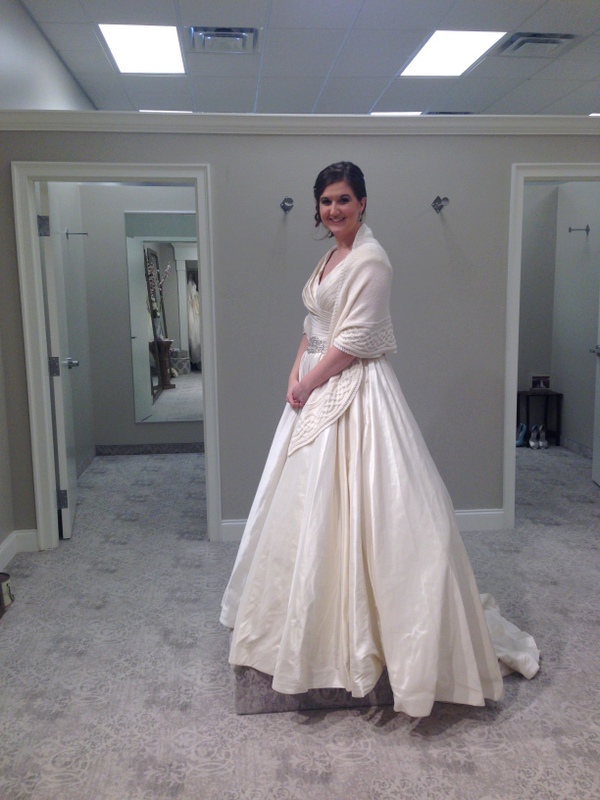 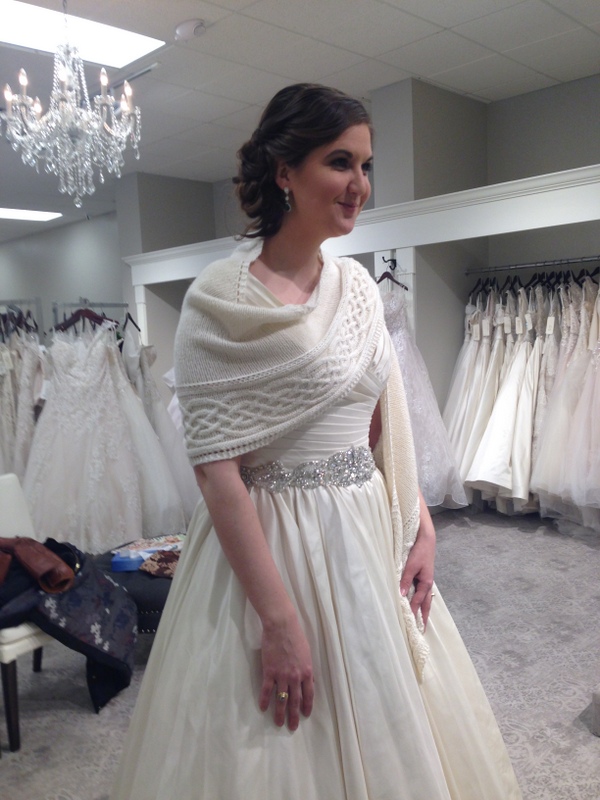 A little dab will do you. Note – this was trial makeup and hair day and the hair was already coming out.  (Maiden Jane’s pet peeve – I remember many proms where my girls chose to pay for up-dos that I had to fix when they got home! It was no exception on the wedding day!) 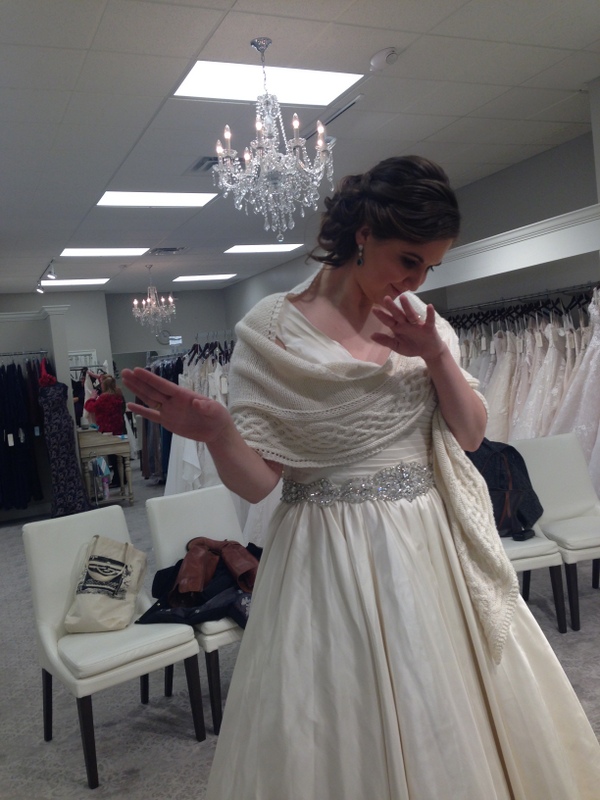 I love everything about this shawl and would love one for myself some day!  We have a few professional shots with it that I will add when I receive. But mostly it is a keepsake for her for this amazing wedding day! And apropos, too, as the homily was around the themes of “knots.” 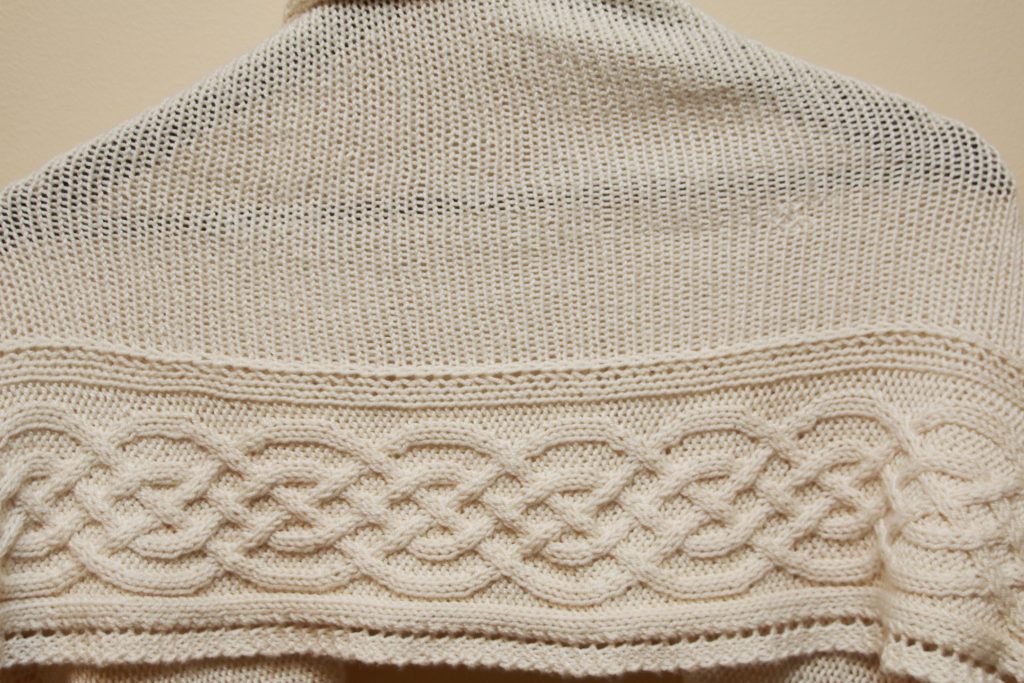 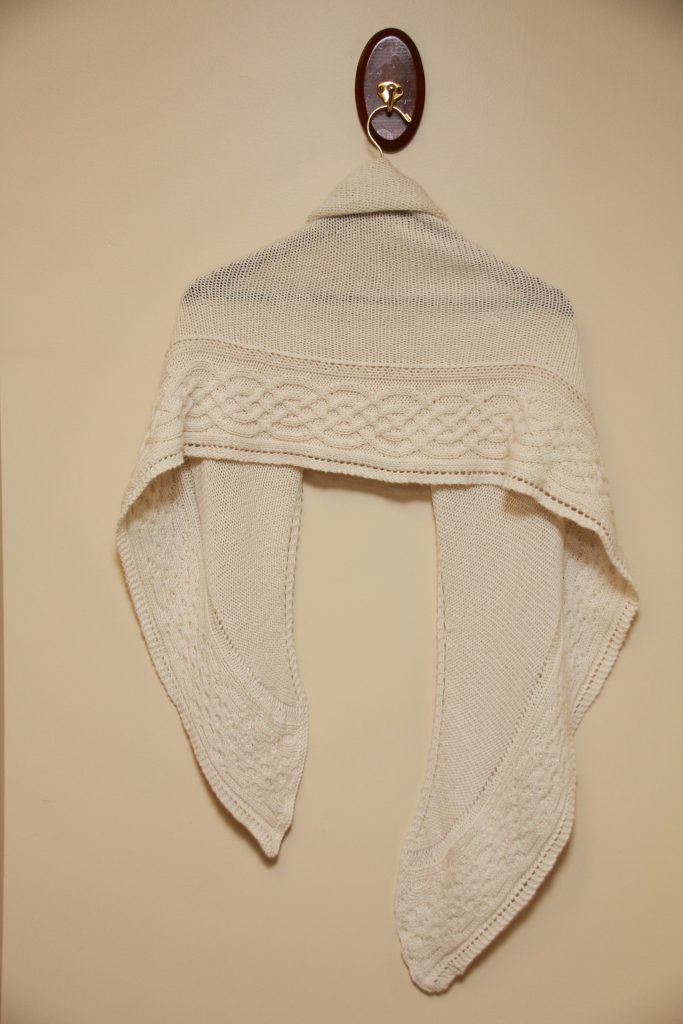 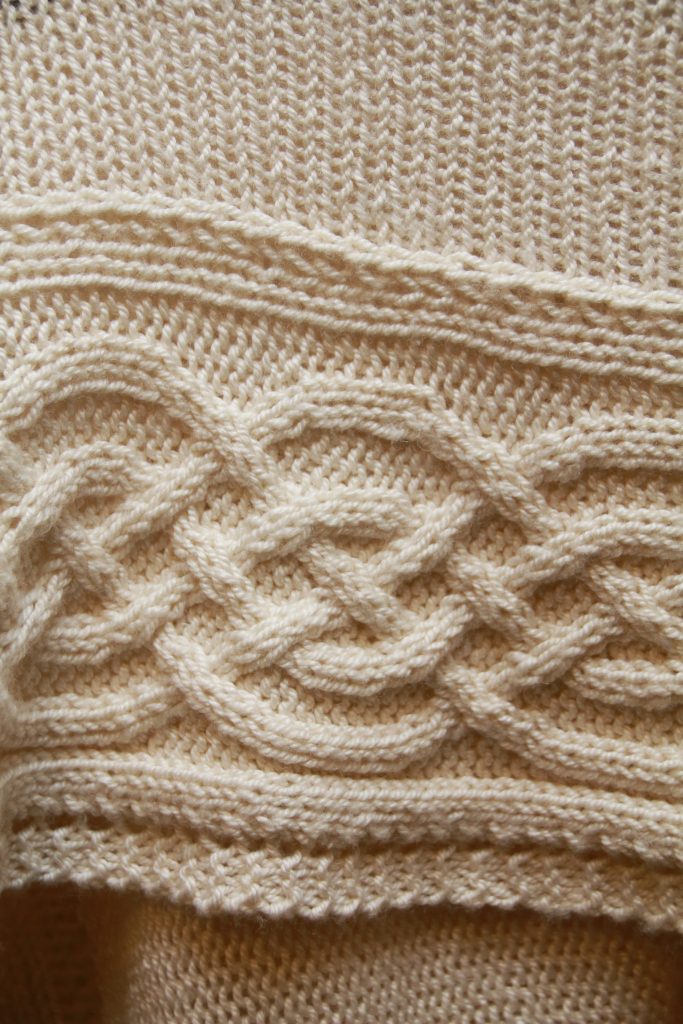 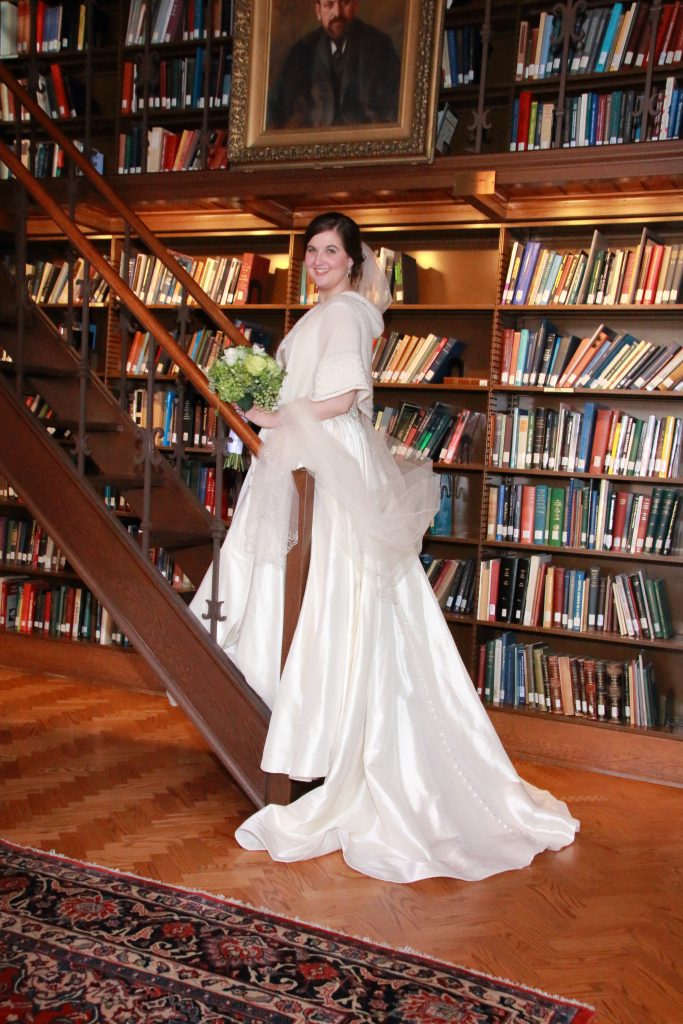 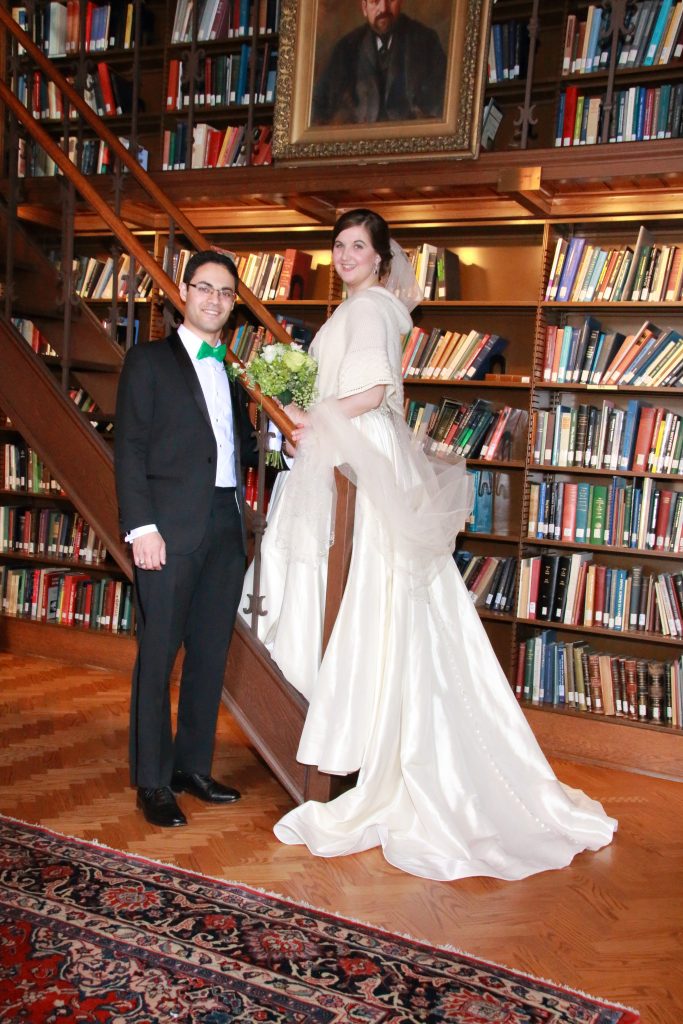 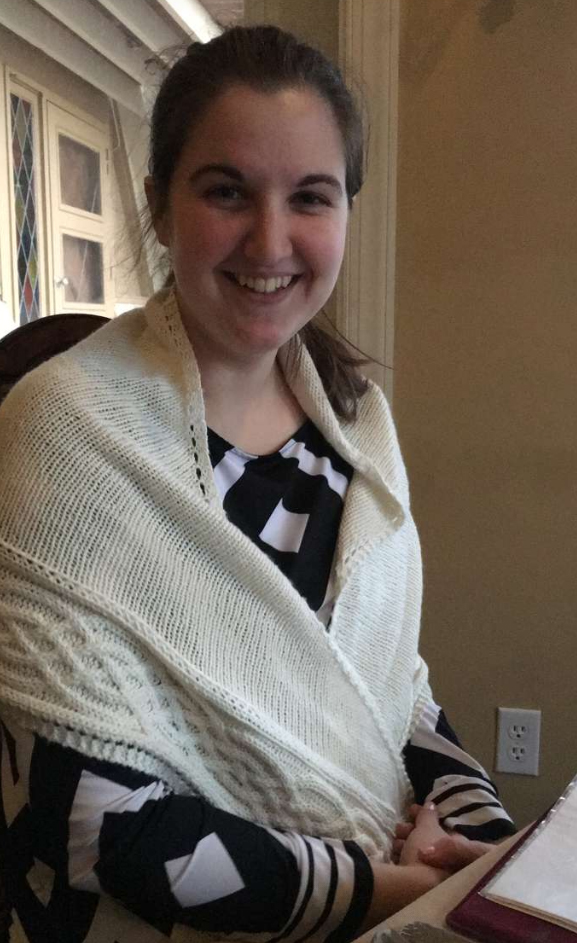 And here she is on a mini honeymoon wearing her keepsake!

I will update this post when I get the few professional shots.