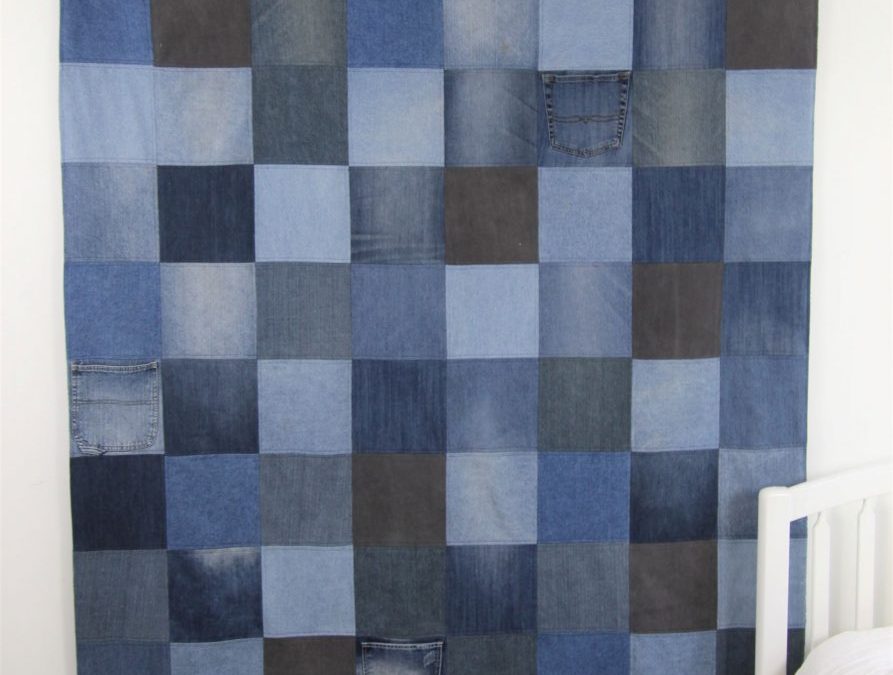 I recently completed this quilt made from jeans. My client was inspired to make something similar to a denim quilt her partner had years ago. All she had was a photo. We settled on a throw size and I calculated that if I used 8.1″ cut blocks, I would need about 80 for a good size throw. I tried 70, but it was just a little smaller than the width of the fleece. Luckily, I had bought 5 yards of the fleece and I was able to sew the back to make a wider throw.

I estimated that I could cut 16 blocks per pair of jeans. I suggested she look at thrift shops for the largest pairs. I would assume you could get 12 out of a pair of jeans. I had a lot of extra blocks in the end.

The four corners of the quilt are from flannel PJs that were falling apart. We decided to anchor the corners with them. I underlined them with a piece of denim. I arranged the blocks to vary the shades and then sewed them together using a half in seam. I often serge my quilts, but I was worried about the bulk. After completing the entire top, I stitched on either sides of the seams to “quilt” down the seam allowances. I didn’t want them bunching up.

Finally, I sewed the quilt top to the fleece, right sides together and turned inside out.

It’s quite heavy. The non-pill fleece is a good backing – not too thick or weighty.