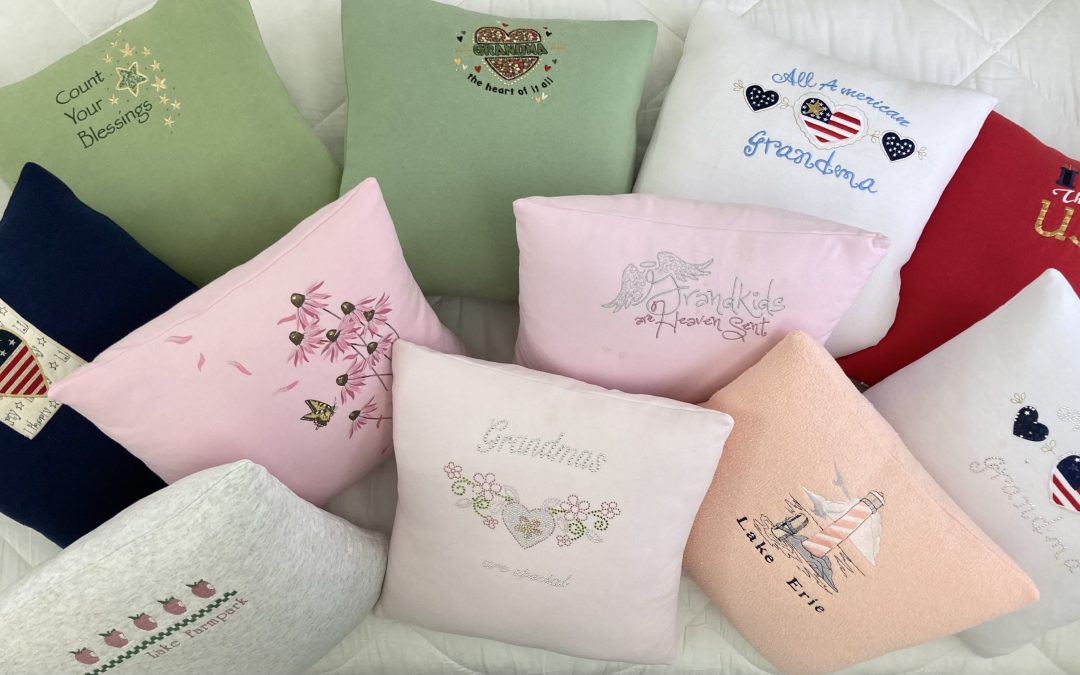 I had the opportunity to create these special memory pillows for a beloved mother and grandmother. It gave me time to reflect on what grandmothers mean to us.

I recall being at a funeral years ago and the priest gave a beautiful homily about grandmas being holy. That really resonated with me. That’s exactly how I thought of my grandmother. At the age I knew her, being one of her youngest grandchildren, she was probably “really old.” I remember her sitting in her special chair while we would go down the street to assist with cleaning her house on Saturdays or helping put up the Christmas decorations.

I think she was working at the family insurance business. My mom told me that she worked most of her life at the business, which I think is pretty amazing. She wasn’t much of a cook so my German Papa did most of the cooking. Years after he died, she would take us, one on one, out to lunch at Kentucky Fried Chicken. That’s when they had a dine in restaurant and the waitress would serve you. We would get in that big-ass car that still smelled like my Papa’s cigars and she would drive us down Lake Shore Boulevard. What a treat and what a special memory!

In her later years, she would often eat dinner with us. One of us kids would go down the street about five houses to walk her to our house to make sure she didn’t slip or fall. And we’d walk her back after dinner. I don’t seem to remember her voice any longer or what we talked about. Just that she was a sweet, kind woman.

I never met my dad’s mother, although I am her name sake, Jane Agnes. I imagine she was one tough cookie because she single-handedly raised these five boys! We really didn’t get much family history over the years, but my mom never met my dad’s father. He was a gambler and left his family. In his later years, Jane found space in her heart to take him in as he was dying of cancer. I think this was to the chagrin of family, friends, and neighbors who lent a hand through the years. A single mom, raising five boys in the depression in Cleveland, she worked at Fisher Body making auto parts. I later spent two summers working there and despite the dirt, grime, and noise of the giant press machines, I was proud that I walked in her footsteps.

A few words that come to mind that are on these pillows: special, a blessing, all-American. I also think of soft. When I think of my own mother and her relationship to her 18 grandkids and 7 great-grandkids: warm, loving, staunch. My kids might add “bad ass” and “unfiltered.” I think one of the beautiful things about aging and gaining wisdom is that you don’t need to bend to everyone’s feelings. You tell it like it is.

We lost my mother-in-law this past year. She was sweet and kind and always had a warm smile. She was a hard-worker her entire life and raised three boys. Her maiden name was Holy, and I think of her as holy.

What makes a grandma holy? A warm smile. A kind word about everyone. The wisdom of the years written on her face. A hug. Prayers for her family. Prayers for the world. Love. Unconditional love. Presence.

What words do you use to describe grandmas?