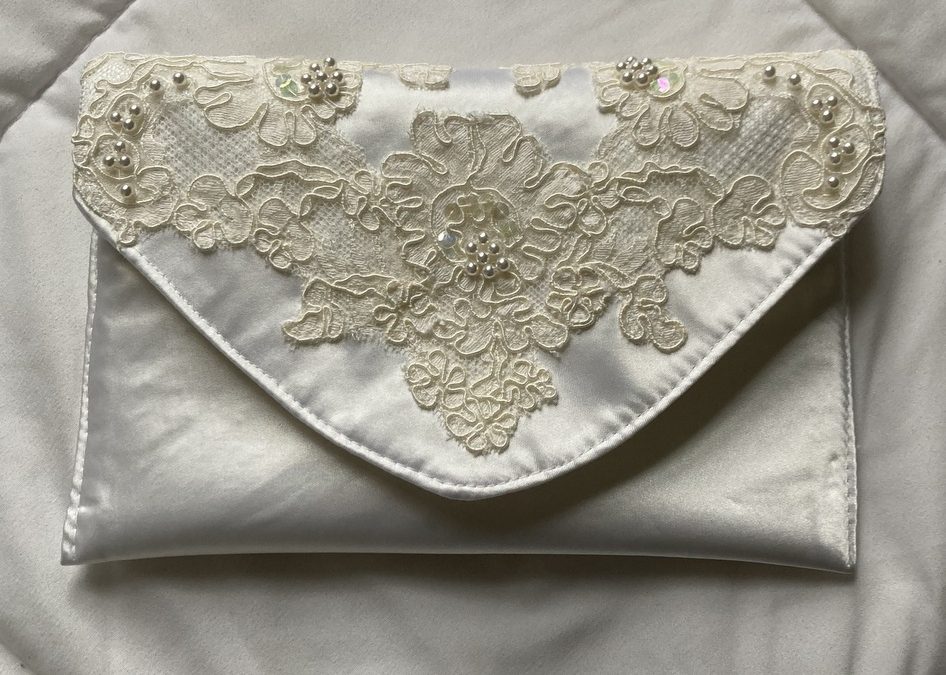 My cousin’s daughter is getting married in June. She had tried on her mother’s dress several times, but like most brides-to-be, her mom’s dress wasn’t what she wanted. (As my cousin said, we got married in the 80’s – the time of big and big shoulders!)

I know the feeling. When my oldest daughter was getting married I had her try on my dress. It was awful. Not only did it not fit and look good, the beads in the bodice had turned black. I immediately cut off the bodice and threw it away. I saved the fabric because it’s a lovely silk taffeta and thought I might be able to make something down the road. I did make a ring bearer’s pillow.

My cousin approached me with the idea that I could make a clutch for her daughter to use on the day of the wedding. We started by looking at patterns and she settled on this envelope clutch pattern. It’s straightforward and has good diagrams.

Looking at the dress, we thought the lace at the bottom of the center front bodice would work for the envelope front. I used the dress satin as the base fabric and lined it with cotton. The satin was interfaced with a woven fusible and I used neoprene as my batting since I had some on hand.

There was some beading at the center of the panel that I planned to use. I removed the beads and then cut around the lace to remove the netting. I then stitched this on to the base fabric. There was enough to wrap around to the back and I think the effect is lovely.

It was a simple project, but a lovely way to take a sentimental item and transform it into a unique keepsake.

My cousin’s older sister had saved the bridesmaid’s dress that she wore in the wedding. We discussed options for a clutch bag for my cousin, the mother of the bride, and her other daughter, the maid of honer.

Her dress is navy blue so we purchased some navy blue satin from Joann’s. I followed the pattern but separated the three components of the folded envelope and used some of the lace from her bridesmaid’s dress to cover the front panel. It was a great way to incorporate part of the dress. She was happy her sister saved the dress after 30+ years! She thought she might need a strap because she figured she would be holding lots of things, so I added an afterthought handle that can be removed and tucked in. I lined this with the satin from the bridesmaid’s dress.

I simply added a small D ring and attached a handle via lobster claw.

The last clutch was created for the maid of honor. Her dress wasn’t in yet, but mom knew it was a light blue. We went to the store together and couldn’t find a satin so we headed to the quilting cottons. We found one that we thought would work. I then covered all of the pieces in the lace from the bridesmaid’s dress. The lace elevated the look. We reserved the allover look for this purse because we weren’t sure we would have enough lace to work with. The lace was sewn with the underlayer fabric and there were seams at the bust so the lace was quite chopped up. I deconstructed as many seams as possible to get as much fabric as possible.

The purses were a hit at the shower. The bride-to-be didn’t quite realize they were made from her mom’s dresses at first.