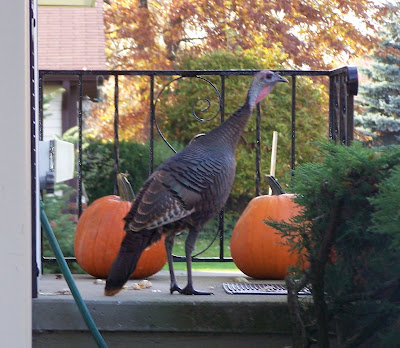 This little guy came right up to the front door of my suburban home!  My 10 year old son took this photo.  He came running into the house, screaming, while I was
on the phone.  I thought, “who broke an arm now????”, but he said he saw a turkey so I handed him the camera.  When I joined them outside they had lost it.  So I went back in and a few minutes later my daughter came in screaming that the turkey was at the front door!  Luckily, my son had chased it around the perimeter of the house and then saw it jump up to our stoop.
I think he’s looking to roast a human….