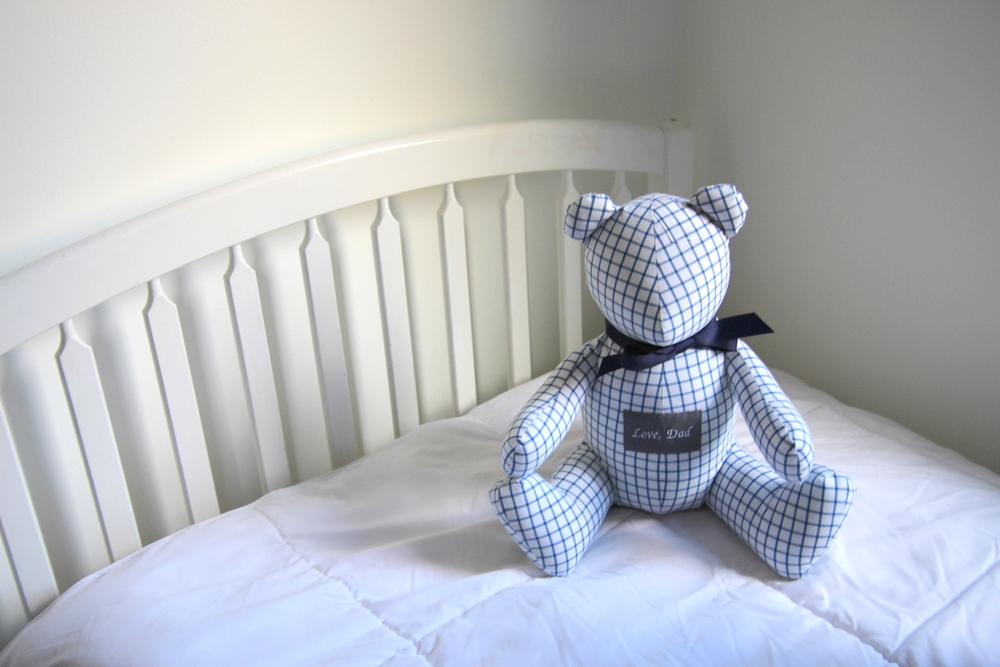 I have made a number of teddy bears of the years and have been searching for a pattern that is the right balance between difficulty and time to make and, therefore, cost. I’ve described the teddy bears as somewhat fiddly to make.

I made a patchwork style a while back. The pattern is very well written and the end result was adorable. It’s called the Melody Memory Bear by Funky Friends Factory. There are 24 pieces to cut.

But, oh, the cuteness in these appreciation photos I received! This was such a lovely story, too. My client’s husband died 25 years ago and she held onto his clothes. She wanted to create special memory items for her kids, so I made a number of shirt pillows. And then she wanted to make the teddy bears for the grandkids. I really loved how the teddy bears came out. You can see I used some sweater and t shirt materials for the bottom of the feet.

One of the earliest teddy bears I made was from a pattern from teddy bear pattern from How Joyful. It’s a very cute bear but I found the pattern a bit challenging.

As customers approach me with different needs and ideas, I keep searching.

My client had 8 grandkids so I was trying to find a simple pattern. I had to wing it based on an idea on this post since the tutorial was no longer available. My client came back this year and asked for three more. We agreed to use the motif on the back of the bear and then I tried to capture part of the motif in the bowtie.

Another client wanted something small. I’m sure I’ve made this over the years, but here the pattern is shown using a baby outfit. Below I used a t shirt and a button shirt.

When a recent client sent 15 shirts to me – 8 for pillows and 7 for teddy bears, I went in search of patterns again. She had sent an inspiration pattern and it had a vintage style to it with embroidery. I found Simplicity 8044 and was surprised it only uses 2 pattern pieces! You cut two for the front and two for the back. I started with the button down she sent to make sure she liked the style of the bear. I did all the embroidery with patches. I was so surprised at how simply this pattern came together. The designer is genius in my opinion! Even with my engineering background I don’t think I have the spatial ability to put something like this together. The original pattern sits about 15″ high. I was surprised how you can make the arms and legs look floppy by simply not stuffing at the joints.

I moved on to to t shirts. First, I interfaced all of the shirts. I also copied the pattern to 90% and 75% so that I could fit it on the shirts. I tried to place the motifs at interesting spots on the bear if the pattern allowed.