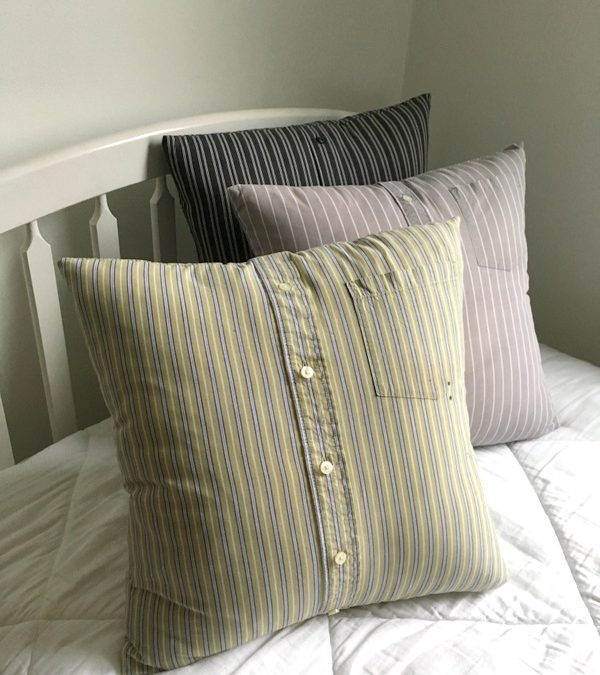 A customer reached out to me recently about making some memory pillows. The shirts belonged to her son. He passed away sixteen years ago. She thought she could make the pillows, but simply can’t do it. So I told her we would work together to make this happen.

It reminds me of how helpful a tangible memory item can be. But it also illustrates how painful it can be to let items go or alter them in some way.

I lost my brother in October. My sister-in-law asked if I would make some pillows. She told me it was really hard. I can only imagine how difficult it must be to go through a loved one’s clothes. We associate clothes with our identity. In my brother’s case, his clothes were iconic – and often the subject of teasing by his loving siblings, nieces and nephews, and mother!

Many of my clients have had clothes tucked away for years before they could consider doing anything with it. Sometimes there is comfort in knowing that the special coat is hanging in the closet or the bag of clothes is in the basement. One of my early upcycle projects was a long, suede coat that sat in my client’s closet for twenty years. It had belonged to her mother. She decided, finally, to send it to me to make some purses which could be used daily and also serve as a reminder of her mother.

I didn’t realize the visual reminder – and the pain and sadness – that clothes could be until I saw my brother’s shirts. I pulled them out at some point before Christmas because I wasn’t sure if they were to be gifts. I consulted my daughter and kids on what style I should make. We agreed that the striped shirts should be the classic button-up style pillow and that the floral shirts should have an open neckline with the collar.

I told my sister-in-law that I could make a blanket if she’d like, but she said he really didn’t have a lot of shirts. He had his favorites and some of these were 20 years old. And they had the holes and ink stains to prove it!

Cutting into these shirts was a vivid reminder that my brother was no longer with me. It was hard. It gave me a glimpse of the pain that someone might go through that is asking me to make a memory item. But it also gave me hope that these pillows might bring some comfort to his wife and sons.

When I shared a photo with my sis-in-law, she realized it was going to be even more difficult to see the pillows in person, so I put them in a big bag and put them in her trunk so she could wait until the right time to open it. I don’t know when that was, but I do know my nephews all have one now. I hope that when they see the pillow, they are filled with a reminder of both my brother’s whimsy, love of his family, and dogged stubbornness when it came to clothes!

I am reminded, through my work, of the pain of loss. This time, it was my own pain and the pain of my family. But I am also reminded of the joy of memories and to that I will hold on.

Yesterday, I lost my big brother. RIP, Tom, who is now boating in the Great Lake of Heaven with my dad. “Prepare a funeral for a Viking!”

Thanks for all your prayers the past two weeks. He had a good death – peaceful and surrounded by his family: his wife and sons by his side and mom and my siblings were able to be together. Our consolation is that he is free from pain. It doesn’t make it any easier on our hearts.

Some reflections on Tom:

– A man with a heart that was as big as his grandiose ideas
– Had me sit in the co-pilot’s seat on the Tin Goose on a flight over to Put-In-Bay
– He was always giving big gifts – cars, tvs, furniture…. bought me my first bottle of Dom Perignon when I graduated college
– Bought a limousine so we could travel down to Florida in comfort (even though somehow I went from South Carolina to North Carolina on my shift)
– Bought us our first and only dog and a pet duck (yes, in the city, which was stolen from our front yard by some kids from the other side of the tracks)
– Bought a hang glider that was pulled by a boat and he would sail all along the shoreline. One time the entire neighborhood went down to see him, he released, and floated down, and crashed into the cliff
– Bought a house on the beach so the family could gather with so many fun memories on the shores of Lake Erie
– Bought power boats, jet skis, cabin cruiser, a sailboat
– The sunsets, the laughter
– He was eccentric, pensive, an artist
– His smile was barely there
– He was a hard worker, a risk taker, started a business
– Lover of classic movies that he would tape record and listen to over and over – Shane, The Robe, Ben Hur, Demetrius and the Gladiators, and of course, the Vikings
– “Prepare a funeral for a Viking!”
– The funeral scene from The Vikings and the haunting music that he would hum
– Barry White, Luv Unlimited Orchestra, Strokin’, some of his musical favorites.
– Nickname,”Spider”, painted on his yellow convertible. We’ll never know the meaning of that nickname.