Stop the Gap! Add a gusset to a button down Shirt to prevent gaping 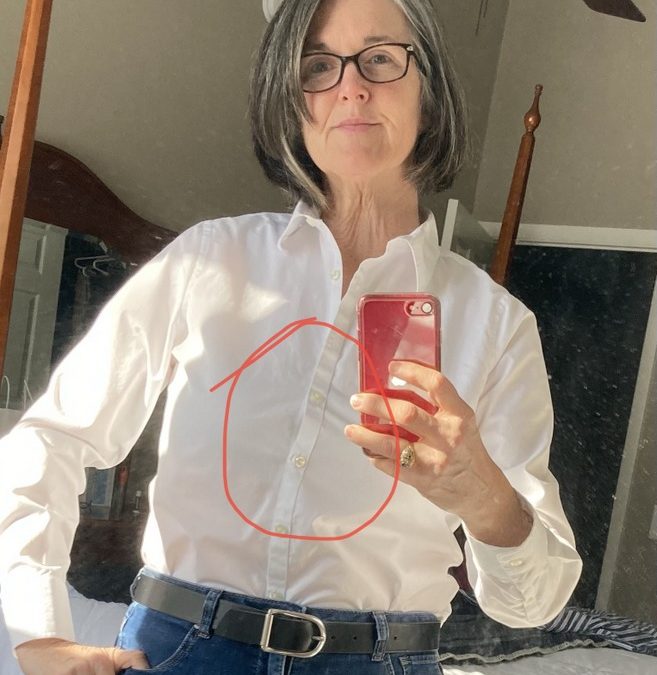 The other day I pulled out one of my blouses because I usually wear a t shirt and decided I needed a change. I have a number of blouses in mainly solid colors that I find useful to wear under sweaters or jackets. I suppose I find them somewhat uncomfortable because I’m so used to wearing forgiving knits. But I do like the classic look. This white blouse is a Land’s End size 12. In general, I size up my tops from Medium to Large because they seem to be a bit more comfortable. But, depending on the brand and design, sizing up can also be unflattering if I’m swimming in it. So when I tried on the blouse the other day and noticed the gap pulling at the bustline, I was frustrated. I have three blouses all the same size that are doing the same thing. Perhaps I’ve gained some weight and/or shrunk the shirts. But there is nothing more maddening than a gaping hole at the bust. If I turned sideways you would see my bra. That’s a no-no in my book. I had just completed an alteration in which I added a buttonhole on the inside placket. This is commonly done by certain brands and is a good idea. However, I felt I needed a bit more ease in addition to simply plugging the gap! Years ago, I bought a button down shirt from Target and it had gussets at the sides that were made out of a rib knit. I loved that shirt. It was fitted, but never pulling.

I was ready to pack up all three blouses along with all the pants that don’t feel comfortable. Instead, I found my worst t shirt. It’s also a Lands’ End shirt that has seen better days. I like 100% cotton tees, but cotton shrinks in length and these are too short. Below you’ll see Lands’ End, LL Bean and Talbots on the bottom, which is my new favorite.

So my blouse is about 20″ at the point that it is pulling. I thought an additional one inch added to each side would be helpful. So I cut two inch strips from the T shirt. I cut right down to the hem and planned to use that so that it would be finished.

I cut up the side seam until about one inch past the underarm seam.

Because of the seam design, it’s not possible to do a double fold unless I would cut the entire sleeve. Instead, I serged the raw edge from one end to the other, attempting to go around the top V in a curved fashion.

Next, I laid the shirt down with about a one inch separation and placed the T shirt strip on top of it. I pinned it down and stitched up both sides from the bottom up. The shirt stretched, so it was helpful to do each side and take up the fullness at the underarm.

After stitching it down you can trim any excess from the top. After that, I zig zag stitched around the edges of the T shirt so prevent it from having a gap that might be visible from the front.

This was a quick fix but I am pleased with the result. It’s not noticeable and it’s much more comfortable!