Thoughts on Life – On Boys, School, and Grades

Where do I begin? I shared this photo of Billy yesterday because it was a proud moment – for him and for me. You see, it was the first time he has ever received First Honors!
He is a young 8th grader – 13. His preschool teacher did not recommend that he proceed to Kindergarten because he did not recognize many letters. I struggled with whether or not to hold him back. I’m data-driven. So I researched “holding back.” There is no data to support that holding back is worthwhile. The only data I could find is that, among kids who are held back, there is a larger percentage that are likely to be bullies in high school!
Most of the data comes anecdotally from parents. If I knew then what I know now, would I have held him back? Possibly. It would have made my life easier. We signed him up for Kindergarten and nothing in the screening process indicated any major deficiencies. 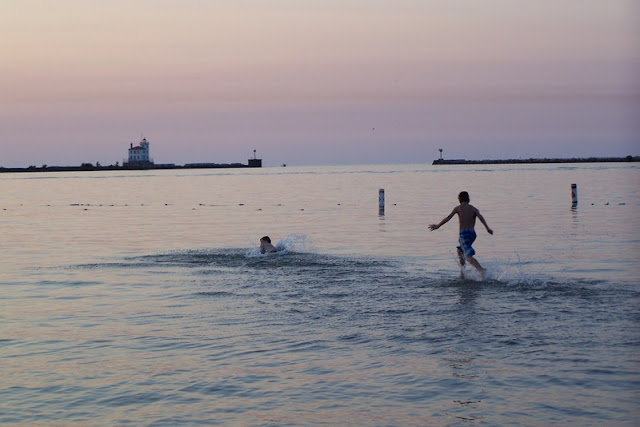 We forged ahead – and he struggled. Struggled to recognize sight words. Boy, is the English language difficult to learn when viewed through the lens of a child who struggles. Sight words are to be learned by sight. Yet you find yourself trying to teach sounding out the letters. He could not recognize the word “the” despite the fact that I repeated the flashcards daily. And do you know how this saps your energy and the energy of your sweet, little boy who has already spent an exhausting day in school? I finally wrote the word “the” next to a picture of things he likes, like a football and a taco. I hung it on the wall and finally, it worked! It was a matter of finding the tools and techniques that would help him learn.
His teachers and I worked together. He struggled a bit, but did succeed in learning to read. During 1st grade he received auxiliary help and was reading at grade level by the end of the year. He was very proud of this achievement  as I believe there was a stigma attached to getting the extra help.
As he transitioned to the older grades, reading ability is necessary to learn – especially in a reading-based learning environment. In fourth grade he would take open-book tests and completely fail. I discussed this with the teacher and questioned whether he could be dyslexic and was assured he was not. I told her we studied the material and he knew it, but he could not properly read the sentences.
By 5th grade, the struggles were even worse. Learning grammar was so difficult. The rules, the parts of speech. All stuff and nonsense if you ask me….. Some teachers thought that I just couldn’t accept the fact that he wasn’t as bright as my older kids. I hated that. I can accept that he might not be off-the-charts smart, but I also felt like there was more capability in his brain than he was given credit.
I read with him all the time. I noticed he would miss words or mix them up. Translate this problem to a test – and a tiny word that is missed can completely affect the question. For example – double negatives – hate those! A sentence might have “not” in it and if he missed it he would mark it as “True.”

There are many examples I could give. I’ve saved a lot of papers over the years. There was major intervention by me and his father just to make sure he didn’t fail. But there was also a lot of stress on the young man. He wanted to succeed. He wanted to please us and his teachers. But it was hard. Simply hard.

We had him tested at school for Learning Disabilities but he never showed he had one. We continued to work with his teachers and with him. We discovered what worked for him and what didn’t. Repetition was very good. Often it took hours in the evening to work with him – leaving all of us exhausted.
I wondered if I should home school him. I wondered if I should have him tested for dyslexia. I talked to my three relatives who are LD teachers.  We simply forged ahead. Each year there was improvement and progress.
Things I took for granted with my other kids became painfully difficult with Billy. Weekly spelling tests….I used to quiz my kids on Thursday night just to check. Rarely was there a problem. With Billy, every day he would spell words wrong – and every day they would be different words!
The worst problem was in subjects where very little homework was given. Oh, how I hated English. I practically begged the teacher to give more homework so that his grades wouldn’t strictly be on 2 tests for the semester!
At his old school, they took away honors. I was mad about that (especially since I had honors students.) But I suppose having a child like Billy made me sensitive to the kids who never receive honors despite working so hard. But I also struggled with the fine line between motivation and knowing limits? How much do you push? What can he achieve? In his old school, they had a behavior-based award: “What Would Jesus Do.?” Sigh….behavior awards do not bode well for the boys…. I would attend the monthly ceremonies and practically stand on my feet and CHEER when a boy won. I was one of those straight-A-does-everything-right type of students that teachers loved.
Our school closed and merged with another school. We transferred Billy to a different school, which was a difficult decision because we were pulling him away from his friends. But we wanted a school that was well-established. We didn’t want him to suffer through any transitional problems the other school might experience. And I’m so glad we did.
I met with Billy’s teachers right away. He transitioned, socially, quite well. He plays some sports. I could see some of the same struggles and continued to be in touch with his teachers. Slowly, he matured and developed. My husband stepped back from helping my son which reduced the stress level on all of us. I continued to work with Billy and there were less tears. (It is painful, however, to have your son tell you that “he is stupid.”)
He had a desire to excel and was taking more responsibility to reach his goal.
The new school has academic honors – 2nd, 1st and Highest (4.0). It was hard to be one of the few who did not get any awards. He felt bad. I assured him that he was working really hard and I was very proud of him. But still, he wanted more. One C knocked you out of honors, so it is not easy to get honors. I noticed that suddenly he was “getting” spelling. It’s not automatic, but it’s a little easier. He is doing more work independently and his teachers and I are continuing to work on developing study methods.
This year he attacked his studies with vigor. He set his sights on Highest Honors but fell just short. I was so thrilled – for him – that he received First Honors. (By the way – most of the “Highest Honors” went to girls. Is it any wonder that girls are more likely to suffer from Generalized Anxiety Disorder (GAD) than boys? Ask me how I know about that….but that’s another blog post.)
I still have the nagging question about dyslexia. I did a lot of research on it and it is possible to have it in “milder” forms. For example, he did not have the flipping of letters – a little bit, perhaps. But he did have other symptoms. My brother-in-law is convinced he had it. My mother-in-law yanked him from Catholic School in third grade because he wasn’t learning to read….Sometimes I wonder if my dad had it. We used to laugh at all the wonderful phrases my dad would butcher…. Nevertheless, we did have my son tested for LD at his new school. Again, they didn’t find anything. But schools do not test for dyslexia. You have to have your child tested at a Neuroscience department at the Cleveland Clinic for thousands of dollars. There are so many people who have it – Rudy, General Patton – that did not know they have it until they learned their kids have it.
I just try to incorporate as many tools as I can to help my son help himself learn. Auditory books, reading aloud, visual aids, you name it. I replaced his desk chair with an exercise ball so he could release some of his kinetic energy while studying. He is a kinetic kid…running, wrestling, climbing trees…He’s also adventurous – loves to sail, ski, skate, play sports.

I still hate grammar. Reflexive and intensive pronouns….who cares? Does learning to distinguish types of pronouns make you a better writer? A better communicator? Please show me the data. I’m not convinced it does. After all, I had to relearn it just to help my son!  But we will struggle through it. He’s learning Latin, also. There’s a bit of chicken and egg with Latin – since learning it is based so much on parts of speech. But, in the end, I think it’s helping Billy and his teacher said he is doing well in the subject.

In the end, it was a day to celebrate! A DQ-ice-cream-cake kind of day! Let’s hear it for the boys!