Thoughts On Life – The Junk We Collect 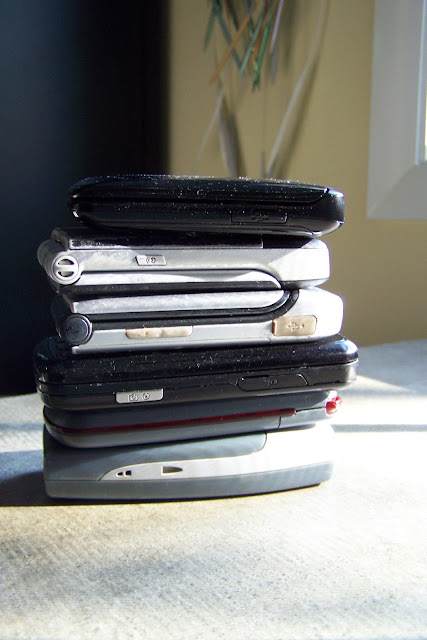 Do you have a few of these laying around your house?  What about chargers, printers, old computers, telephones, TVs, refrigerators, etc…..

I’ll limit my discussion to cell phones today.  My husband had a work phone and I had a Tracfone pre-paid for emergencies.  My oldest son never wanted one but my next daughter was asking for one.  We finally bought a pre-paid cell phone for her birthday.  She blew through the minutes in two months.  After many arguments we bought the phone back and told her that if she wanted a phone as a social tool then she had to pay for it.

She researched various options and selected a pay-as-you-go plan.  And she paid for it (and continues to pay for it.)  That has been the rule.  Three of my kids now own phones.  The 12 year old does not need a phone.

Contrary to popular belief, I believe that cell phones have increased anxiety.  They give a false sense of security that you are “always in touch with your loved one.”  I have many stories where just the opposite happened.  The first time I gave the phone to my kids who were driving to a concert I asked them to call me.  They forgot, turned the phone off (they are musicians) when they got there and I worried.  (In reality, I figured they forgot.)  A hairdresser let her 13-year-old go to a New Year’s Eve party and her daughter was not where she was supposed to be and not answering her phone.  She finally tracked her down at 3 AM. (Yes, she got grounded.)  And many, many times that people panicked because they could not reach their loved one when that person’s battery died, forgot their phone, don’t have good service in a building, etc.

I have taught my kids to make real contingencies.  If they go to a party, I want the name, address and phone number (land line) of the friend that lives there.  If we separate at the mall, we plan to meet somewhere at a certain time.  The old-fashioned methods worked for us back “in the day” and I still like to use them.  Do cell phones add a convenience to our lives?  Yes they do.  But they have also added a lot of stress, expense and waste to our lives as well.