What Kind of Mother Lets Her Son Make a Bullet-Proof Vest? 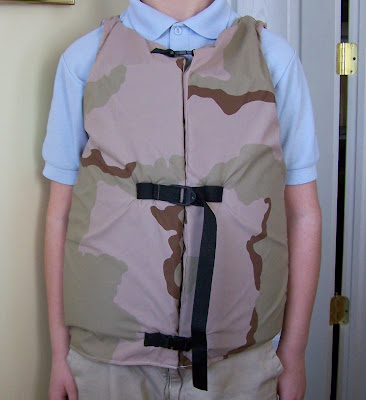 My son is enjoying learning to sew.  He saw a program on the military channel about the history of bullet-proof vests and wanted to make one.  We dug out some fabric (that I used to make a tent for him) and he designed the vest with a little help from me. 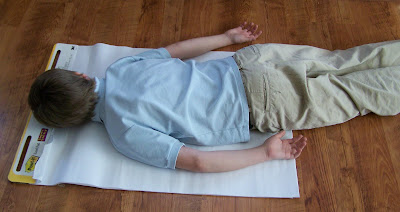 He drew his basic body shape by laying down on the floor.  We added some extra ease and away he went.  I sewed the curved portions and the connectors.  We stuffed it with some foam before sewing the bottom. 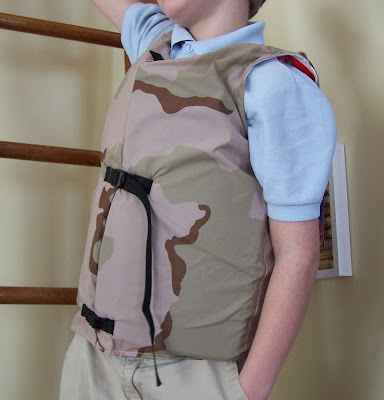 My son loves everything military and camo.  How this came to be I’m unsure.  I suspect it was his love for and admiration of his Papa, who served on Iwo Jima.  My dad rarely spoke of his war experiences, but started sharing more of his stories later in life and my son listened intently  My dad never glamorized war and would really not be happy that my son now says he wants to be in the Navy someday.  Right or wrong, I have always tried to develop my children’s interests.  My son loves the Eyewitness books that are about the war.  We have given him videos and DVDs.  We have also attended reenactments of the Civil War, WWII, and D-Day.  We have all learned things from these events.

My oldest son, at the age of three, was intrigued by a local one-man band that played nine instruments along with pre-recorded tracks.  He received extension cords for Christmas that year and pretended to hook up all the equipment by “plugging” the cords into the couch and into his tinker-toy creations and instruments.  We took him to Kindermusik and gave him piano lessons.  We toured power plants to build upon his fascination with electricity.  He used to take old-fashioned reams of computer paper and lay them out and draw high-tension towers and electric lines running all over the place.  It was this strange confluence of electricity and music that led him to build his own sound business.  He invested in equipment and runs sound for live events at area schools, churches, bands and colleges.  And, despite his parents suggesting electrical engineering as a field of study, he has decided to pursue a degree in music.

Piano lessons for all the kids is a given – non-negotiable.  Why?  It was the only thing I did as a kid.  As the youngest of six kids, I wasn’t even a Girl Scout!  If I couldn’t walk or ride my bike to it, I didn’t do it.  But Mom believed in piano lessons, so I studied that.  The main reason I gave my kids piano lessons is that I believe it has benefits beyond learning an instrument.  So even if my kids don’t go on to become performers, I think they have all benefited from the technical aspects of learning to read music….from the confidence that is grown from having to perform in front of people, and from the simple love of music that is developed by studying it.

My girls?  One enjoys arts and crafts, and you’ve learned a little about her through this blog.  The other…she was reading since the age of 4 – earlier than that she would sit on the couch and just look at books (how easy was that kid?).  Suffice it to say, she’s a brain, can read and play music like nobody I know, and might pursue a medical career.

So, I hope that I’m viewed as a mom who helped her kids develop their passions.  Or, maybe, I’m the bad mom that lets her kids play with toy guns.  I just hope I’m a mom who lets her kids imagine and dream….and right now, my youngest has been inspired by Shaun White. 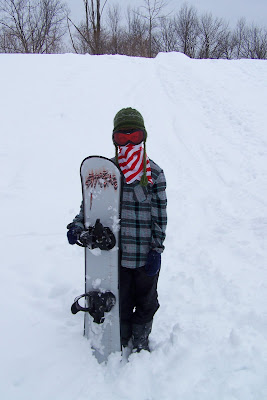 Leave a Reply to Sarah B. Cancel reply