When Irish Eyes Are Smiling – A Memory Quilt Made from Ties, Scarves and Linens 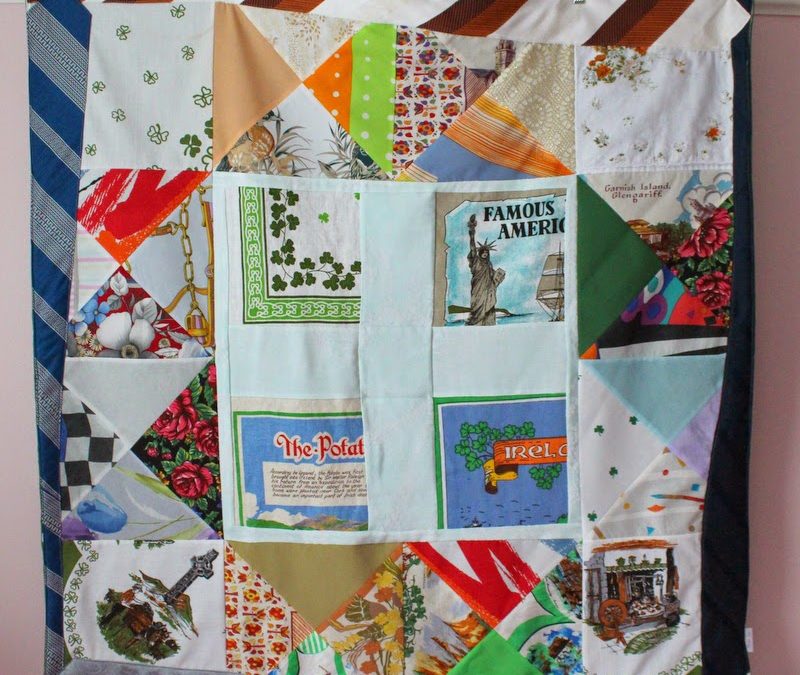 This looks like a crazy quilt, doesn’t it?  I actually have three of them! A local customer, with a connection from my past, asked me to make them.  First, let me thank Rosemary, a reader and one-woman cheerleader and promoter of my goods!  Thanks Rosemary! She lives in the “old neighborhood” that I grew up in and so many of us love so dearly.  My customer grew up in that neighborhood, too. She actually had the same last name as I did – but we are not related! She lived on the same street, but at the end and on the other side of the boulevard.

Her parents, who passed away, were Irish. She had a bag of their belongings, including ties, Irish tea towels,

She waited patiently (I hate to admit, almost a year) until I got past my busy high school graduation season, and then summer.  A project like this doesn’t necessarily take a long time to construct, but it takes a period of time to design. And in my limited studio and home space, that requires a bit of space – both physical and mental.  It would be easy to construct a blanket in the same design as my 9 block or baby blanket. I know the dimensions, the fabric needs, etc.  But in this case, especially since I was making three blankets, there was a lot of design and math involved!

I started by making piles of each type of fabric. I had 12 ties. I originally thought about placing the ties in a radiating design. But then realized the size would be perfect for a lap size blanket and  used them to create a border instead.

It was hard to divide the linens into thirds. So I simply cut them into squares.

I used a table cloth as a border for the linens. I was hoping to border the entire blanket in the tablecloth but didn’t have enough.

I interfaced the scarves with a lightweight interfacing. I was concerned that they were so thin, they would not hold up to washing. I was also concerned about them stretching on the bias. The interfacing really changed the hand of the fabric, but I think their colorful designs and integrity stands, while improving the strength of the entire blanket.

I am so thankful for the patience of my customer and hopeful that she can give these blankets to her siblings for Christmas gifts.