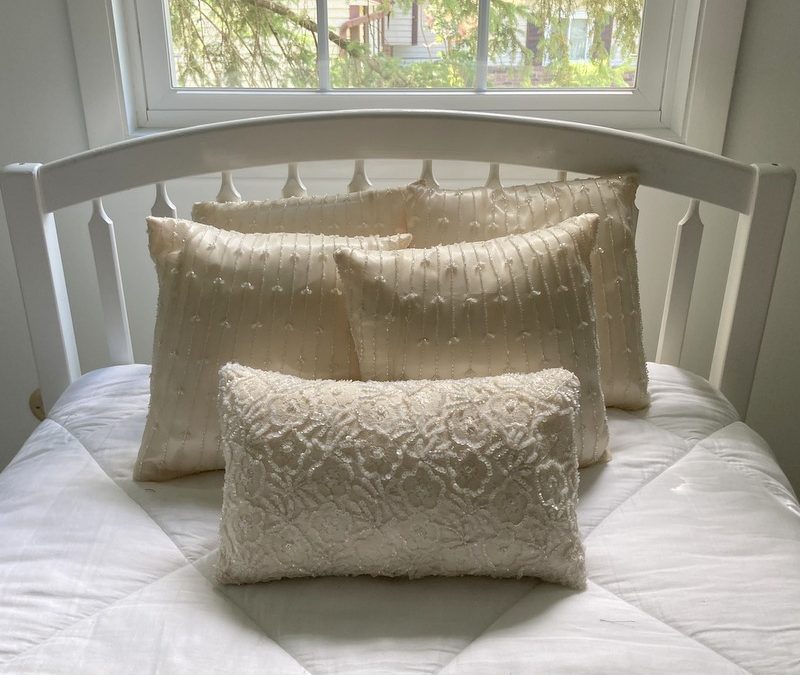 A client contacted me with a request to make at least one pillow for her from a dress that belonged to her late mother. Her mother wore the dress to my client’s wedding in 2016 and then passed away several years later. My client had been holding on to it until recently.

My client really wanted just the center section of the dress. So I took a deep breath and cut across the dress, just above the chevron and just below the bust. I was sure to unzip the zipper below the cutting line so I could use that to insert the pillow form. Beads were flying everywhere. I used my oldest scissors and cut two rectangles from the fabric. I then sewed the two sides together, ensuring the overlay was captured in the seam (first time it wasn’t.) Some of the threads were pulling out so I tied any that were loose and used fray check to add security. If I pulled on the threads, the beads would simply unzip and fall off. I had our central vacuum handy and I’m still stepping on beads a week later!

Despite it’s smaller size, I think it is just a perfect accent. I cut open a pillow form and pulled out the stuffing until I had a good estimate. I used the back zipper to insert it and played around to get the right fullness.

My client asked if I could make four more pillows for her sisters. I had enough of the lower overlay to make 14″ pillows. I purchased satin from Joann’s and sewed the overlay squares to that, and then sewed the two sides together. Again, there was lots of bead and thread work.

This was a challenging project due to the beading but very rewarding. My client and her sisters were thrilled.